Another year and another attempt to complete the full distance of the West Highland Way. This year’s training wasn’t as heavy as usual years with lack of back to back long runs at the weekends, but I felt good and relaxed and had the mindset of just competing the race.

The day of the race I was quite chilled and not nervous, I have my normal routine of having filled pasta for dinner and sipping away at SIS electro and energy drinks.

Arrived at registration Milngavie Town hall after 10pm and the vans for the drop bags were outside the hall, which was handy.
Inside I got registered and chilled by eating sweets as a pre fuel, but nerves were kicking in and wasn’t in the mood to eat bananas or anything solid.

At 1145pm we walked up to the start point to the WHW obelisk, glad Debbie was with me to keep the nerves calm and I was starting to think, why am I doing this. I was glad of a light pack, carrying the minimum but mandatary kit. I had 2 water flasks but just had one filled with SIS Energy drink, I only need one filled with the closeness of the water checkpoints at  7miles-WHW/A81 road crossing, 12miles  WHW/A811 road crossing (near Drymen). I had sachets of SIS energy and electrolyte in my pack pouch if I needed to top up on energy and at the checkpoint there was bananas, sweets and crisps which I took.

Start. From the start of the race to Water Point 1 at 7miles on the WHW/A81 road crossing arriving 0110 was a nice steady run and I set into a steady run and not pancaking. Folk at the front of the race sped of fast which I was impressed with but thought to myself not for me this year to try that speed stuff.

As we were reaching WP1, I was settled in with a good bunch, where we opened gates and closed them gently to avoid waking up nearby houses. There was one guy who would run super-fast maybe for 600 meters and then walk, I was amused by the style but also getting annoyed, getting overtaken by him and then having to take over him…

From WP1 to Check Point 1 at 12miles at WHW/A811 road crossing (near Drymen) arriving 0210 I was setting into a slow steady pace and was on my own now on the Gartness Road, this is the boring tarmac section and hilly, I was kind of panicking that I was going to be on my on crossing the field that goes over the field to Drymen, in case I got lost, but I did a reccie a few days before with my son but it was different at night.

I got through the field on my own, I was glad to reach the gate on the other side as I felt I was panicking like drowning, the gate was like reaching to a side of a swimpool that makes you feel safe.

From CP1 to Water Point 2 at 19 miles at Balmaha Car Park (Information Centre) arriving 0353 was a section I knew well, with the midweek long runs done over Conic Hill. I fuelled up well with bananas and crisps and sweets and just filled my water bottle with just water to have a fresh clean drink. I was glad of the friendly faces at the checkpoint, it gave me a boost

From WP2 to Check Point 2 at 27m Rowardennan Car Park (at Information Centre) arriving at 0603 this was a long-time consuming section for me, I had filled both bottles up, one with energy and the other electrolyte. This section was a battle and the lack of training was showing and I pressed on, this was the first time I put a mp3 player on to get some rhythm.

Reaching Milarrochy Bay this was the time to get my head torch switched off and take a couple of pictures. The rest of the run to Rowardennan was a mixture of hiking up hill and jog downhill, fitness was hitting me hard and felt tired. Also was needing the toilet getting gurgling cramps so was glad to get to CP2 to do a number 2.

This was where I got my drop bag and the midges were bad. I quickly changed my top and replaced water bottles, which had energy and electrolyte powder to just add water. I grabbed a coffee and a Warburtons bread ham and an egg sandwich which is why I run this race, just to get some Warburtons bread.

From CP2 to Water Point 3 at 34 miles at Inversnaid car park (in front of hotel) arriving 0829 this section was long as I hiked up out of Rowardennan and the rest of this section and enjoyed the nice morning sun. Coming into Inversnaid car park was nice along the waterfront and sat down at the WP3 van and grabbed some cola and a coffee with some ham sandwiches and took a roll and bananas with me for the walk out of the WP3.

From WP3 to Check Point 3 at 41 miles to Beinglas Farm Campsite (Falloch cabin) arriving 11.02 I love this section because of the terrain and also a chance to see the wild goats, I didn’t see any goats but just the matted smell of them.

From CP3 to Check Point 4 at 50m Auchtertyre Camp Site (new C.P. location) arriving 1421 this is an undulating section where the new section of cow pat alley was upgraded to a better surface. CP4 I had soup and cheese sandwich with coffee, the guys manning this checkpoint were runners that had done the race before and were very attentive. A guy called Steve Bell was helping and I have seen him on the hills of Helensburgh.

CP4 to Check Point 5 at 60m at Bridge of Orchy Hall, arriving 1715 this was a 10 mile section but was looking forward to getting some snacks at the Tyndrum shop where I had some ice cream and got a can of monster energy drink. Coming out of Auchtertyre Camp Site I spoke to a group of hikers and the lady I chatted to said she used to 24 hour runs around a running track, she was great to chat to and gave me some motivation. This was when the rain started to come on.

Bridge of Orchy Hall I had a pasta with bread. this was where I got my emergency rucksack with sleeping bag and poles. I changed clothing/shoes and my bottles for fresh ones, with an extra bottle in case I needed extra. I also nursed my blisters on my big toes, I always get blisters on them…

CP5 to Check Point 6 at 72 miles to Kingshouse Hotel arriving 2203 this section was wet and misty going over the hill to Inveroran Hotel, I was on my own and kind of felt lonely. Heading over Rannoch moor was a challenge with the rain and just kept my head down, I was feeling emotional and spent time praying and singing Psalms out loud which was uplifting.

Arriving at Kingshouse it was teaming down with rain but was feeling determined and it felt dark with low cloud. I got into the shelter and decided this was where to put on full waterproofs, even the trousers. This was where I met runner Robert Bishop number 42, He was wet as me but was glad of the soup and coffee.

From CP6 to CP7 at 81m to Kinlochleven arriving 2620 was the wettest run of my life, it was torrential, the path from Kingshouse to the start of the Devil staircase was just a waterfall of water. Me and Robert took turns walking ahead, changing over at gates, we could see nothing but kept dazzling Robert in the eyes with my headtorch ooops!

Ascending the Devils staircase was a slog and I led the way, I could sense Robert was tiring. On the way up my torch started to flash, and it was time to change to my spare one which I had handy in my pocket.

Descending into Kinlochleven, Robert was tired and was thinking of sleeping at the next CP7, I thought to myself, no sleeping for me, If I stopped, I would not finish. I was tired to, but I was determined, and my feet were wet and blistered.  At Kinlochleven CP7 we arrived, the place was busy with people wet and people thinking of dropping out. Some were setting up sleeping bags to sleep. Roberts family were there, and he was saying he was going to sleep but I said I was going to head after a sandwich. I had my drop bag here, but I just took out gels and bars. I had a whole change of clothes and shoes and I decided not to change and leave. Robert saw I was about to go, and he said he would join me, and we made our way out in the pouring rain for the last 15 miles.

From CP7 to Water Point 4 at 88m in Lundavra at the WHW track and road junction arriving at 3025 it was stupid with the weather conditions; we slogged our way up the steep climb out of Kinlochleven. I was screaming in my head to press on and not give up, I was nearly in tears, that I was on the last section. Robert was struggling, he was like the walking dead, but he was pushing on.

A lot of water works were happening on the trail and in the dark we took a left wrong turn and heading down to a bridge thing, I felt this is not right. We walked about and I had to get my phone out, to get the viewranger map app on, I had to duck under a big truck to keep out of the rain to see where we were. We had to walk a mile back and found the trail. we made our way again watching day light coming in, when it got brighter the rain calmed down. Arriving at Lundavra everyone was asleep in the van, so we tapped the window and got the poor guy up. We got a hot tea and made our way.

WP4 to the Finish at 95m to Claggan Football Park in Fort William arriving at 3340 we were on our way to finish; it was the first time I really chatted to Robert. On our way I think I was hallucinating, I was looking back and could make out my mother walking a distance back, maybe it was another walker and I was only tired.

Coming down the red road to Fort William was agony my quads were dead; my feet and toes were stinging.

Running into Claggan Football Park was amazing but saw my wife and said “never again” but next day I was thinking if I could do this faster. 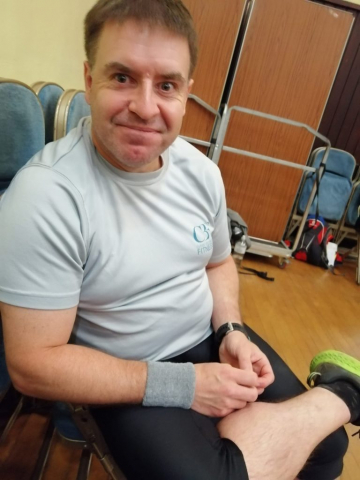 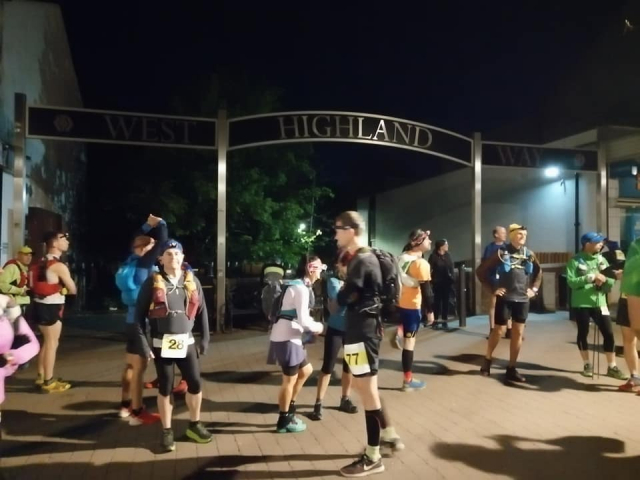 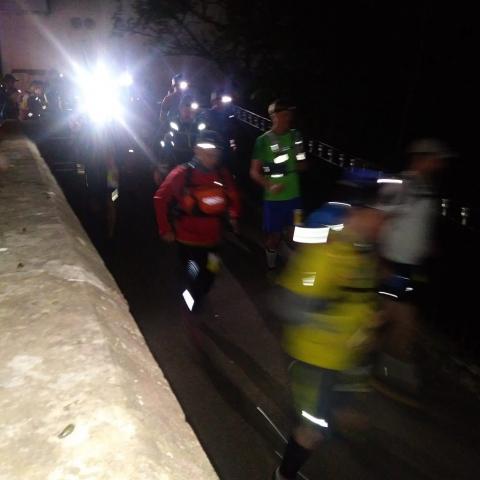 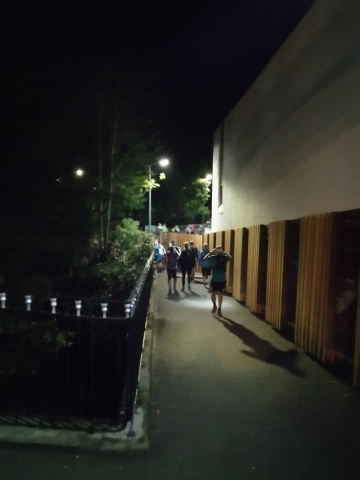 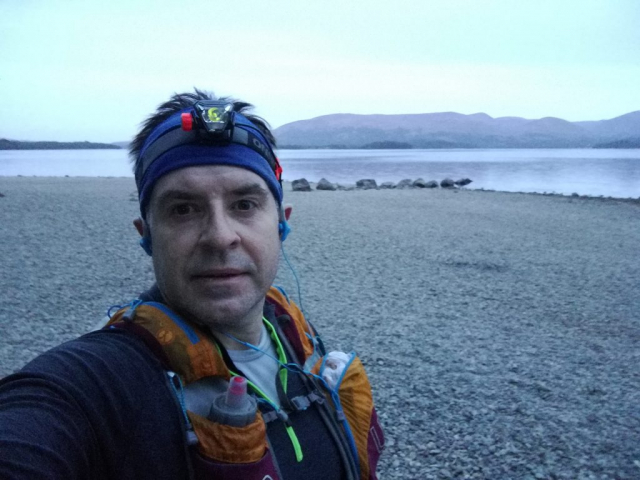 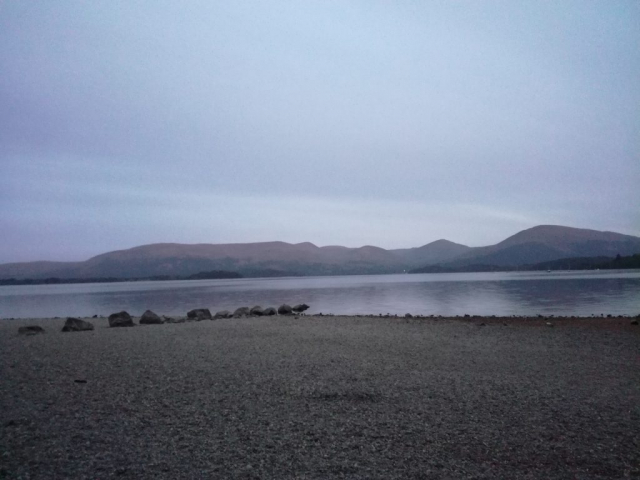 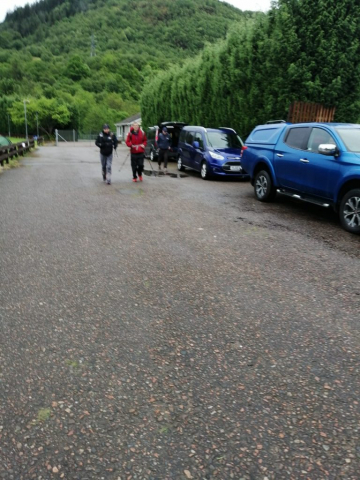 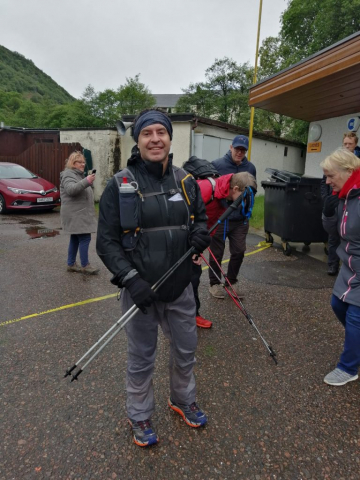 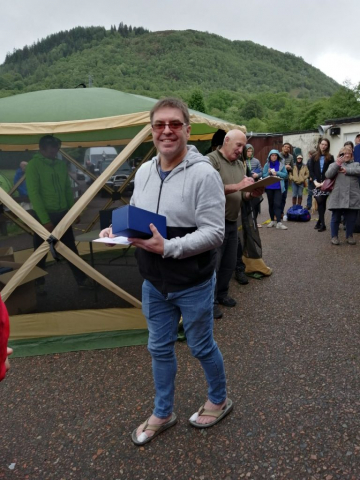 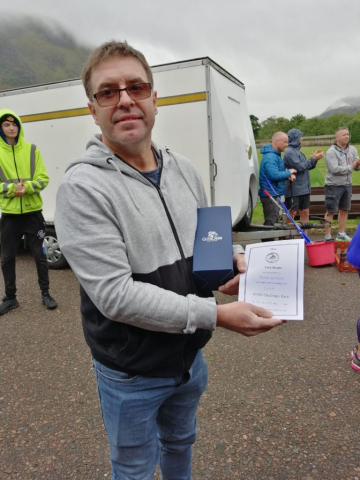 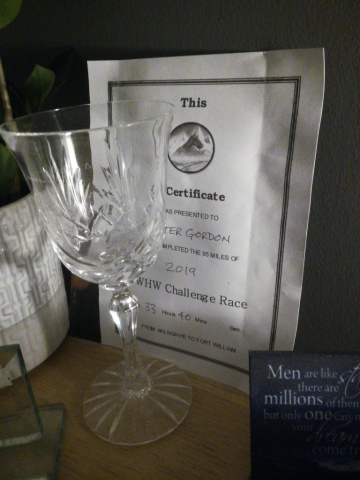