Another year to take on the WHW challenge Race and I am glad I was able to take the start line.

Since last year I was suffering from Planter Fascia on my left foot, and it wasn’t really till 2 months ago I managed to get some relief.

Before I was able to do some long runs with Carol as she trained for the Rome marathon, but I battled through the uncomfortable pain under my foot as I was beginning to strengthen my feet through KARS in Pilates.

The few months of building up for the race I managed to get consistency in my running with doing spin classes at Chris Bowman Fitness in between runs to keep pain a bay.

Training consisted of weighted hiking up and down Ben Bouie building up the distances and adding pole work. I knew from last year I wasn’t going to running up hills but just speed hiking.

On the day of the race my wife and I left early and arrived in Fortwilliam at a good time to chill out and get to Morrisons supermarket for the toilet and a sandwich as I felt lightheaded from the drive.

Arriving at the Salvation Army building was straightforward, and it was great to meet a friend Aaron from Stirling, he looked as nervous as I felt inside.

Getting my number was straight forward, it was great to see a couple from Helensburgh Howard and Hilary doing the registration.

At registration there was boxes of SIS gels, I had packed a few for myself from home and if I knew the gets were at registration and at checkpoints, I wouldn’t have taken any.

So, I had a few trips to the toilet, my nerves were subconsciously annoying me and was glad to make our way to the start point at The WHW sign at the junction of Glen Nevis Road and the A82(T) road.

The race started on time at 10am and I placed myself at the middle and ran steady for the first 3 km with running through Braveheart carpark.

The next 3km was the long climb, it was getting hot and humid, and I was glad to get the poles out and get hiking. There were a few runners around me as we climbed but it was very quiet, maybe like me contemplating the next 90 miles or so.

Hiking past the fort I was glad I was near the end of the hill and the start of a descent to Lundavra, heading to Lundavra, I was just going steady making sure to hike the hills and run the downhills. It was good to chat and run with Steve who I ran with on the EHW, it made the time go past quick.

The rest of the run to Kinlochleven was good, and Tailwind fluids were going down well and came into I arrived at checkpoint 1 Kinlochleven at 1323 and left straightway after filling my bottles with Tailwind and taking a couple of ham and cheese sandwiches.

It was Howard at this checkpoint and was very encouraging and the small crowd made the atmosphere great with cowbells ringing. I felt good leaving ready to charge up the Old Military Road towards the Devil’s Staircase.

But as I started the assent my head hit the wall, I felt very unmotivated and couldn’t be arsed doing the climb. It was getting very hot, and I think I was worried going on to the open mountain side with the sun on me. I drank a lot and at 25 and 26km I just got my head down and hiked and ran, pace was slow, but I got into my head I wanted that view of Buachaille Etive Mòr.

In the matter of another 5km I ran out of fluid it was so hot and I was dehydrated, I am a major sweaty person lol.

Between 31 and 32km, I knew there was a stream and took water from there, but I was worried I wasn’t urinating, I was thinking this could be a problem, but I knew I could get water in Kingshouse hotel beside the toilets.

Descending the Devil’s Staircase was easy and steady, hikers coming up the hill looked tired and stressed with the heat, but it was good to see humans and say hello.

From the bottom of the Devil’s Staircase. And along to the Kingshouse hotel was tough, I was slow, energy was low, but I kept going. I was looking forward to the Glen Coe Chairlift to get some food and fluids.

I arrived at checkpoint 2, Glen Coe Chairlift at 17:00 and left at 18:40 making it 23 minutes to stop. Stevie Bell was at this checkpoint helping, I told him I wasn’t urinating. He said I wasn’t drinking enough and to try and take as much water as I can.

I managed to get some food and a couple of sweet teas, but I fancied some fruit which was refreshing.

So, I filled up my flasks and headed off to Bridge of Orchy, going along the Rannoch Moor I felt strong and running steadily. I am heading up over the hill to Bridge of Orchy and felt amazing and strong climbing up and managed to fill up my bottles in the streams. I passed a female runner who was struggling up hill, she just said I hated hills. As I descended to Orchy a lady asked if I had passed her that was waling up, I think it was her mother and I was hoping she wouldn’t give up.

I arrived at checkpoint 3, Bridge of Orchy at 21:45 and left at 2216 this was where I picked up my emergency rucksack and a drop bag to replenish by drinks. I also had a pod noodle, can of peaches and a mug of Ovaltine. This was great to get some food and energy, one of the runners beside me sitting said he was envious of my canned pears, I offered him some but didn’t want any.

I saw Louise Harrison, she came in chirpy speaking to the checkpoint staff.

I headed off and made my way up under the railway line and felt good running towards Tyndrum, I stopped to fix a hotspot on my foot and felt very strong, I was thinking to myself that I am ahead of myself in time from the year before, but thought I better not get too overconfident because anything could change.

Going through Tyndrum was straight forward I met with another lady runner, and we chatted as we got to Auchtertyre. I was so tired but just followed her.

I arrived at checkpoint 4, Auchtertyre at 12:39 and left at 12:54 I had some soup, the checkpoint was great they were so helpful and had 2 or 3 different soups. I restocked my flasks with tailwind and set off for the night with the headtorch already on.

From here I ran with Elaine Wilde from Dundee, she was great to run with as we attacked the trails over Crianlarich. She told me of all the ultra’s she had done and the kitchen she was getting revamped.

We worked hard together on these trails and I this was when my quads started to pack in, and Elaine carried on ahead but couldn’t keep up.

I arrived at checkpoint 5, Beinglas at 04:09 and left 04:38, my quads were stiff especially my right one. Hilary and Howard were on this checkpoint, and they were very chirpy and encouraging, I don’t know how they keep so happy.

I headed off and my right muscle was strained. I continued for a while in case it was cramp, I tried stretching and rolling it with my poles but made it worse.

It was one of the most painful sicking pains trying to hobble downhill crossing burns and muddy paths.
I headed on the trail for another 3km, but I knew if I carried on along the lochside I would have to get rescued.

Hobbling back was a nightmare passing runners heading to the loch and explaining my downfall, I felt frustrated, but I made the right decision and spent the night in the cabin at Beinglas farm.

I slept with a few others in the cabin, and we were picked up in the morning by Jim and got dropped of a Balloch.

I had a great adventure but was happy to get home, I can’t wait till next year to try again. 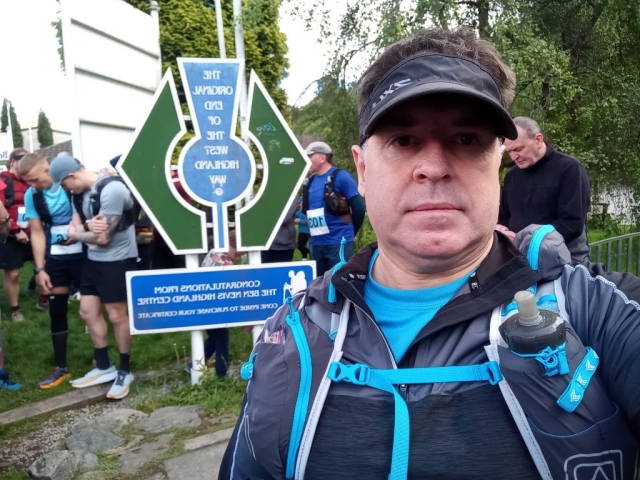 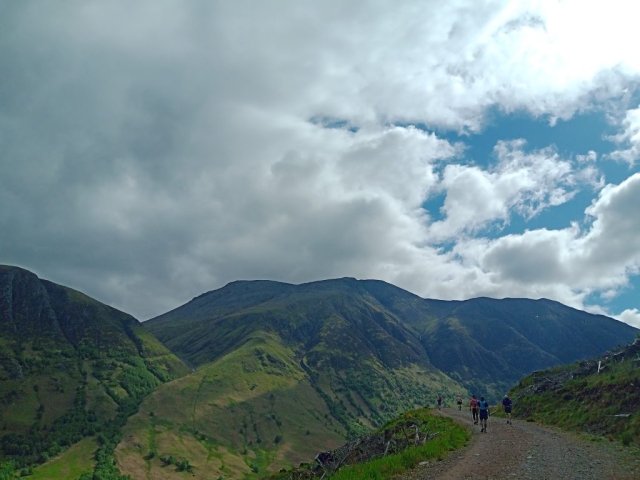 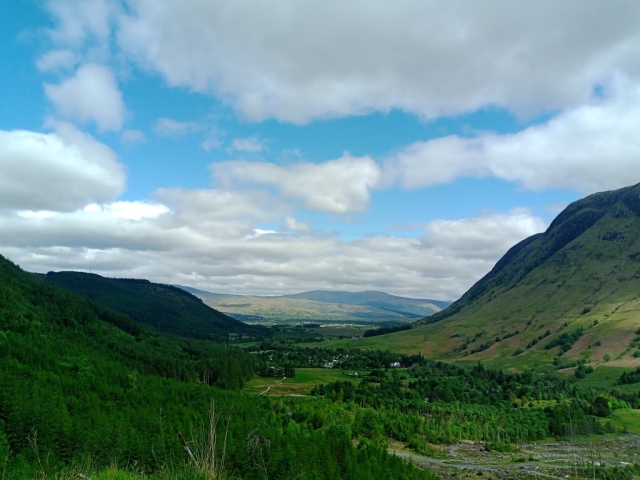 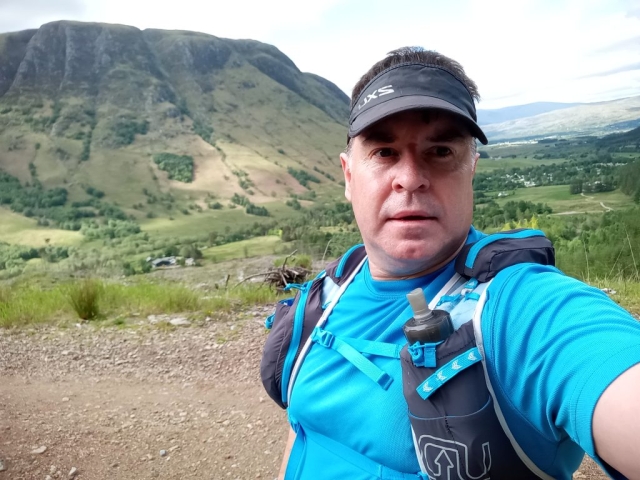 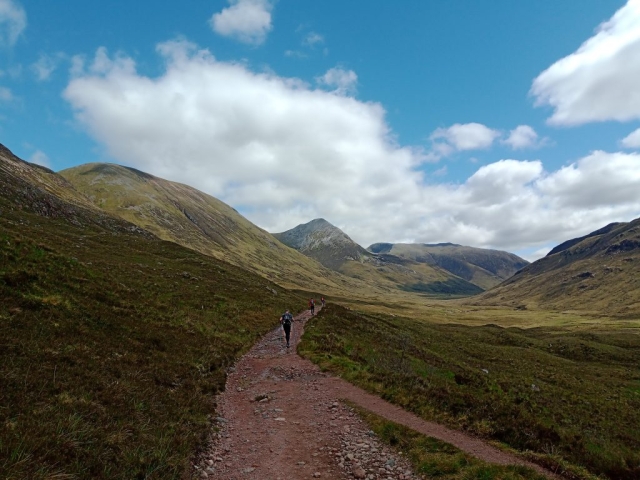 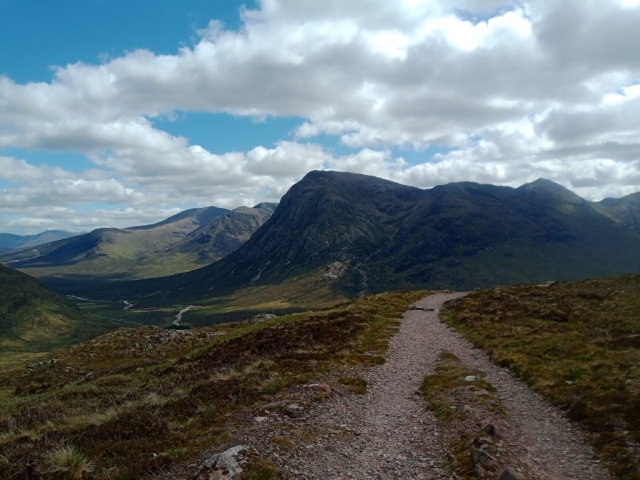 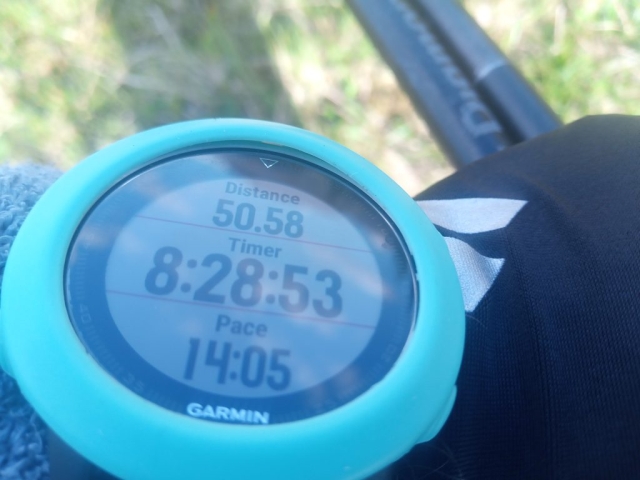 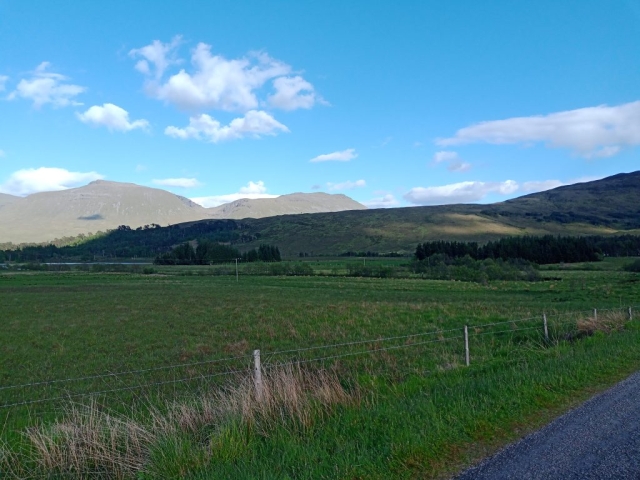 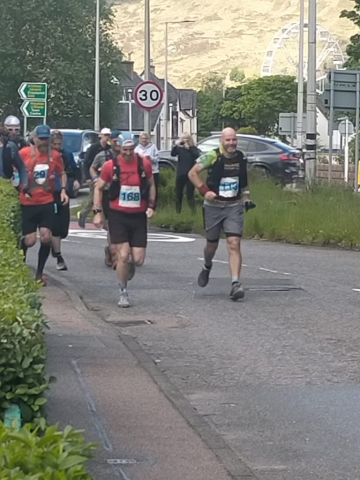 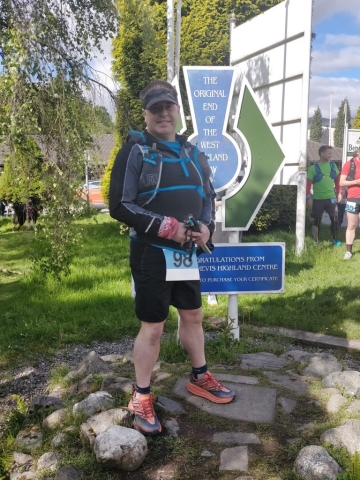